READISCA is an NIH-funded international clinical trial readiness study for spinocerebellar ataxia type 1 (SCA1) and type 3 (SCA3). These SCAs belong to a group of ~50 autosomal dominant diseases that cause degeneration of the cerebellum and variable other parts of the nervous system. Patients with these SCAs suffer from progressive loss of balance, hand incoordination, slurred speech and additional features leading to eventual total disability and premature death. There are no efficacious treatments other than supportive therapies. Patients with SCA1 show the fastest progression of the disease while SCA3 is the most common SCA worldwide, and both share an expansion of the tract consisting of tandemly repeated CAG triplet units in the respective genes (ATXN1 and ATXN3). Scientists successfully identified these mutations in 1990s and extensively studied the biological pathways through which the genetic mutation leads to the respective diseases. These advances in research have resulted in the development of rational experimental treatments. Early therapeutic interventions have shown better efficacy than treatments in the later stage of these diseases in genetic animal models of these diseases and clinical trials of related disorders. Clinical trials of these therapeutic drugs are starting now. In READISCA we have been obtaining and will continue to obtain critical information to optimally design such clinical trials and correctly interpret the results in pre-ataxic and early ataxic carriers of SCA1 and SCA3 mutations. This NIH-funded longitudinal multi-center study began in 2018 under the leadership of five principal investigators in the US and Europe. The Houston Methodist is the Headquarters of READISCA and collaborates with many premier academic institutions of the READISCA Team. 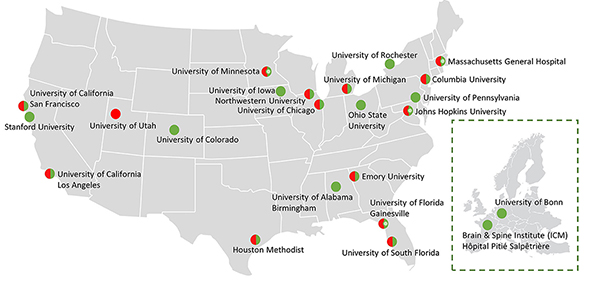 Houston Methodist is the coordinating site for 23 institutions
across the globe.

Provided by the National Institute of Neurological Disorders and Stroke